I heard a comedy bit once that talked about the ideal concert for adults.  You know, job-a-mortgage-and-kids type adults.

This ideal concert would have only one band – the one you paid to see.  If there’s an opening artist, they wouldn’t play too long, and they’d be good and you’d actually enjoy them.  The concert would start right after dinner, maybe 7 or 8pm, and it would start on time and end on time.  You’d get home at an hour that still showed two digits on the clock, send the babysitter off, and go to bed at a reasonable time after watching a talk show or catching up on the books on your nightstand.

I thought it was funny mostly because it was so true.

Our friends have been amazing about showing their support over the last 18 months.  We played four theatre shows, and we drew pretty well at all of them.  And it’s not like all my friends are boring adults – quite the contrary!  But I know that a lot of my friends don’t really want to go to shows where we start playing at 11pm.  And if we’re going to keep playing typical concert venues, that’s what’s going to happen.

So we’re trying an experiment.

“Four-walling” is what it’s called.  I hadn’t heard it before about three weeks ago, but it’s not new.

Justin did it with his high school band.

DJs did it in the 90’s in warehouses.

Shoot, some kids in high school used to do it in the desert outside Phoenix, and it was called boondocking back then. Although I guess there weren’t really walls. It was just a keg and a boombox in the desert on the outskirts of town.

Basically, four-walling means getting a venue for a show and putting the whole thing on yourself.  Rather than the venue providing staff, sound, staging, lighting, promotion, ticket sales, and alcohol, you provide everything yourself.

Think about the cost of that.  Yep.  It’s a HUGE risk – we’re looking at several thousand dollars of outlay to make this party happen.

Thus the pre-sale efforts.  (And working my ass off with as many voice lessons as I can possibly handle.)

This time, we’re putting on the party in a huge motorcycle showroom.  It’s gorgeous.  It’s industrial, brick-walled, high-ceilinged.  There’s a keg tap already in place.  And if you feel like picking up a Ducati while you’re at the show, well… they’re keeping the store staffed!

There are a lot of benefits, both to us and to the audience.  We have more time to decorate the space than at a concert venue.  We can set the schedule and the lineup ourselves.  We can hire the sound guy we want.  We can offer an open bar, saving everyone money.  We can control the ticket sales and take 100% of the profit… after we cover all those expenses. 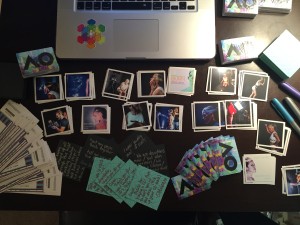 If you want a ticket, a CD, or other merchandise, here’s where you get them.  Do it now – if you buy before April 1, you get lots of additional personalized goodies in your envelope.  🙂